In addition, Impact Sports announced the kick-off of a crowdfunding campaign to support the next stage of product development, advanced testing and manufacturing. This campaign enables contributors to help fund the work in progress by donating to the campaign or pre-ordering helmets. The company expects to ship the first Cal Blitz helmets between April and June next year. Access to the Indiegogo campaign page is available here.

“Two years ago, we watched a young patient deal with his third concussion by age 12,” said Dr. Josh Cleveland, co-founder of Impact Sports. “My wife, Gina, and I knew that we had to do something to force change in an industry that was not willing to recognize there was a problem in football. While youth athletes are suffering from concussions and other injuries, companies continue to build helmets the same way. Impact Sports is going to change how we protect these athletes. Furthermore, we have partnered with San Jose State University and the States Developmental Football League (SDFL) to bolster our efforts in bringing to market, next year, the safest helmet possible.”

Ben Thienes, director of operations at San Jose State University, said, “We have had the opportunity to review the Impact Helmet System project and believe it will better protect our athletes. We met with their founder, Dr. Josh Cleveland, and confirmed our participation! San Jose State University football is excited to be a part of the testing and development of this helmet as we work to reduce traumatic brain injuries in athletics.”

With multiple layers of moveable protection, the Cal Blitz will redefine how helmets are made today. These layers flex, yield and redirect force, allowing for greater time to reduce that force and protect the athlete. Impact Sports’ patent-pending Impact Helmet System (Integrated Membranous Pressure Attenuating Cranial Technology) mimics the anatomy of the human skull in order to reduce the amount of force felt by the athlete.

Dr. Uzma Samadani, associate professor in the department of neurosurgery at the University of Minnesota, brain injury researcher and member of Impact Sports’ advisory board, said, “This is the first helmet design innovation that makes sense. The Cal Blitz was created with an understanding of how the developing skull protects the brain. Traditional helmets do not have the ability to diffuse the forces athletes experience. While the newest helmets represent significant improvements, they still lack the features that are necessary to provide maximum protection. I believe that the Cal Blitz has the potential to become the helmet of choice of organized sports leagues at all levels.”

The Cal Blitz was inspired by, and moves, the way the human body was designed to move. When a baby is born, his or her skull is made up of a series of plates joined together at a tough, fibrous suture line. This suture line, or "soft spot," allows the skull plates to slide over each other, making the head smaller for labor and delivery. This helps the skull absorb the force of delivery, protecting the brain. It also helps protect a baby's brain from impact forces caused by normal movement. The adult skull still flexes a little bit to allow for movement around the bony plates when dealing with impact force.

Impact Sports’ Cal Blitz is comprised of a combination of semi-rigid "cranial" plates with an elastic suture (that connects them) and covered by an outer "skin.” This design produces a helmet that yields, flexes, redirects and absorbs impact forces at the same time, significantly reducing forces to the head. It also produces a helmet with other important features and benefits, including: 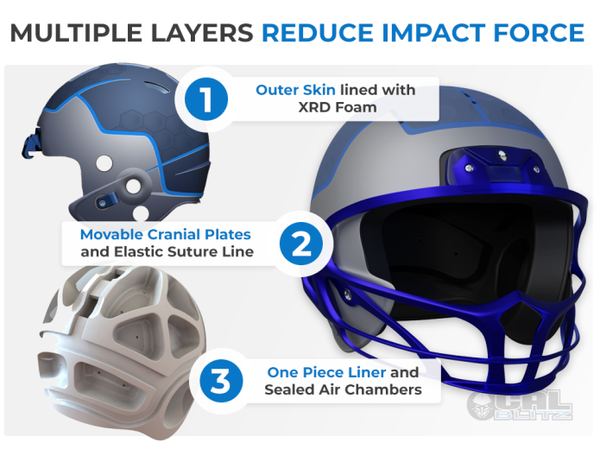 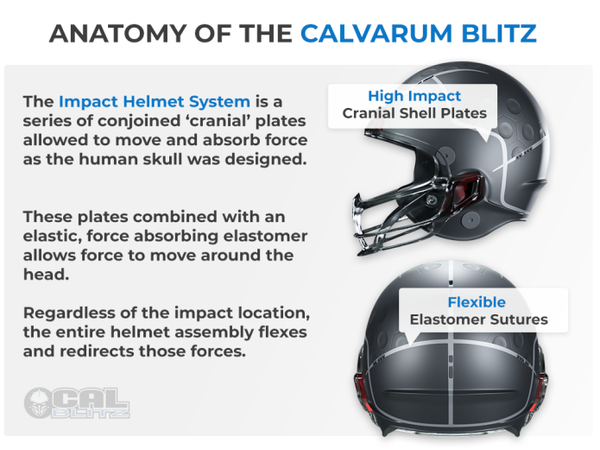